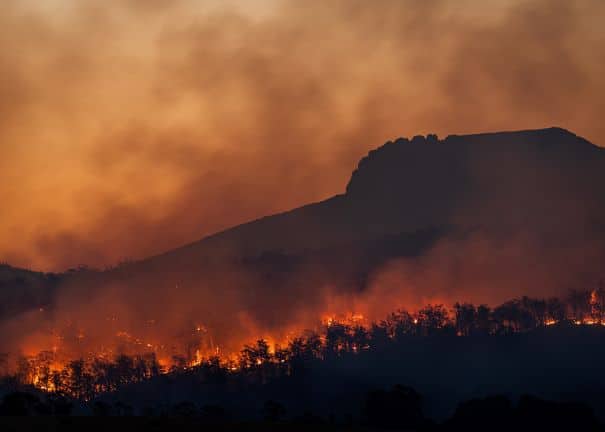 Wildfires are not uncommon in Sicily where the olive trees of il circolo grow. Blackened pieces of land or sometimes even whole hills remind of exciting moments when we – or people we know – feared the devastating fire. The Mediterranean climate makes summers hot and very dry. Our olive trees can handle it, but there is a risk of wildfires. We are well prepared and keep a close eye on events. But why exactly are there so many forest fires and how does Sicily deal with them?

Actually, there are always have been fires in the summer. And there is always a fire somewhere in the world. Wildfires are more often in the news when the fire comes close to people. This can create the impression that there are more wildfires than normal in Europe. (1) Many places that are hot and dry suffer from them. The forest fires in California in the United States or Australia are often in the news because they are very big. But also countries that you hear about less often have to deal with huge fires, such as: Russia (especially the plains of Siberia), Canada, Zambia, Angola and Brazil. 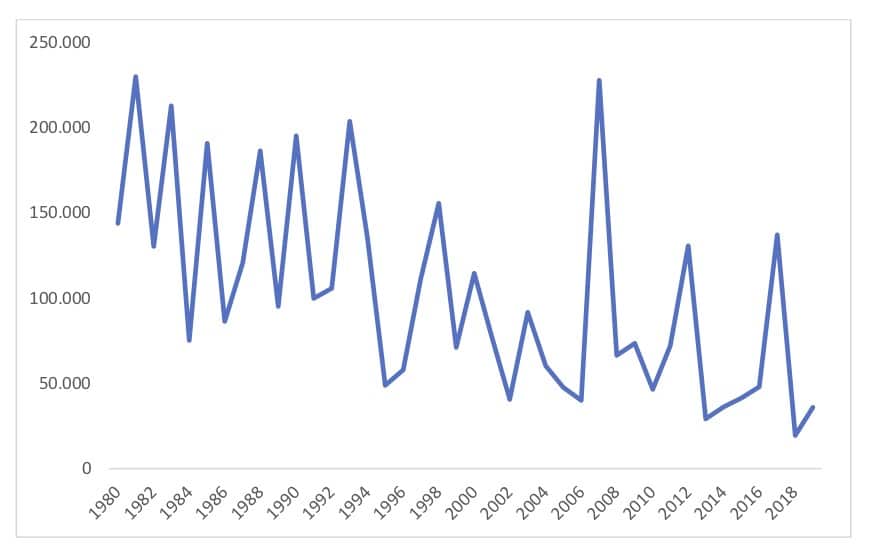 Graph: area burnt in Italy 1980-2019, per year in hectares based on European Environment Agency data (8)

What causes fires in the Mediterranean area?

Most wildfires in Europe are caused by man, sometimes unintentionally, sometimes deliberately. Only a very small percentage have a natural cause, such as lightning. (1) Our aim is not to speculate on the causes but to see how we can learn from them and focus on prevention.
The Mediterranean region has a complicated relationship with fires in nature. This is because some fires are essential in an ecosystem to, for example, fight insect pests and diseases. And also, for example, to clear away leaves, branches and other biomass, so that there is less fuel for future fires, thus reducing their magnitude.
The large forest fires mentioned in the news are usually not beneficial to nature. Not only do they cause great economic damage, but above all they are bad for air and water quality, biodiversity, the soil, and the appearance of the landscape.(2)

Wildfires are not the result of climate change as is sometimes thought. There have always been fires in the summer. It is expected that fires will become more extreme as a result of global warming. And that wildfires will move from the Mediterranean areas to the north and will occur more frequently in areas with a temperate continental climate such as ours in the Netherlands. Climate change certainly makes the problem of forest fires more urgent. (1) According to the European Environment Agency, the risk of weather-related fires will decrease if we meet the Paris climate targets, i.e. < 2 degrees Celsius warming (middle picture). If we continue to emit as we do now, the danger will continue to increase significantly across Europe (last picture).

In Sicily, there is another development that contributes to the occurrence of wildfires. In the period between 1955 (42.6%) and 2016 (35.5%), the area of agricultural land – mainly wheat, vineyards and olive groves – decreased, with a relative decrease of 20.2%. The phenomenon of abandonment and decline of agricultural areas can be linked to the socio-economic and demographic dynamics that characterised Sicily, and the whole of southern Italy, between the years following World War II and the 1970s. On the one hand, this has led to the migration of Sicily’s rural population to urban centres and other more economically developed places (northern Italy, northern Europe and America) and, on the other hand, to a reduction in the number of people employed in agriculture as a result of employment in other economic sectors, industry and services.(7)
As a result of this exodus, many old olive groves are abandoned and neglected. There is no one left to carry out the necessary maintenance and fire safety measures. Traditional farms and agricultural land are also often located in places that are difficult to access, far away from large cities or villages.  This makes them a fire hazard for the entire area. The damage caused by wildfires on these pieces of land is so huge that it cannot be easily compensated by planting forests and undergrowth.

What is done during wildfires in Sicily?

Fighting wildfires is the responsibility of the Comando Unità Forestali, Ambientale e Agroalimentari (CUFAA). It is a special unit of the Italian Corps of Carabinieri that has taken over the personnel and functions of the State Forestry Administration since 1 January 2017. It specialises in the protection of land, water and the environment and also deals with safety and controls in the agri-food sector. To fight forest fires in Sicily, the CUFAA’s “carabinieri forestali” come into action. They have a small number of Canadair planes and helicopters.

In Sicily, the fire brigade is also very important in fighting the fires. The firemen determine what people should do to protect themselves from the fire. Usually, people are advised to stay inside and close windows and doors. If the fire becomes too intense or uncontrollable, people are told to evacuate, and often the inhabitants of these areas know what to do because they have grown up with them. Sicily is a popular holiday destination, which sometimes makes evacuation more complicated as tourists are often not used to wildfires and panic more easily. (2) 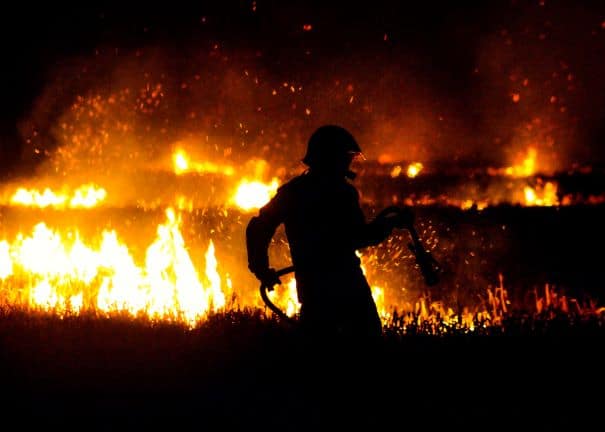 The professional fire brigade is not alone in fighting the wildfires. The local population in many places has a volunteer fire brigade and other ways to fight the fire and warn each other. These volunteer fire brigades are groups that do more than just protect each other’s houses. These groups often work throughout the year to keep an eye on things and ensure safety as much as possible. In addition, they also work as regular firefighters in getting citizens to safety and putting out fires. (3)
Less official channels are also used by (local) communities to warn each other about forest fires, for example via Facebook groups or WhatsApp. When the “carabinieri forestali” have their hands full putting out the fires, residents help each other to protect their belongings. According to scientists, this ‘bottom up’ approach works best. This means that policies are decided with and by ordinary people and not just by the government. (4)

How can wildfires be prevented?

Preventing wildfires is not easy. Some scientists say that the only way to preserve biodiversity is through policies that prevent abandonment and promote traditional agriculture. (3) It is then necessary to find out why people move away from the countryside and how rural life can be made more attractive. Local context is important here. If problems at local level are not considered, policies may make little difference. ( 5) Not all places are on a steep slope and not every village has a great shortage of jobs.  This requires cooperation between different sectors to really improve the situation. 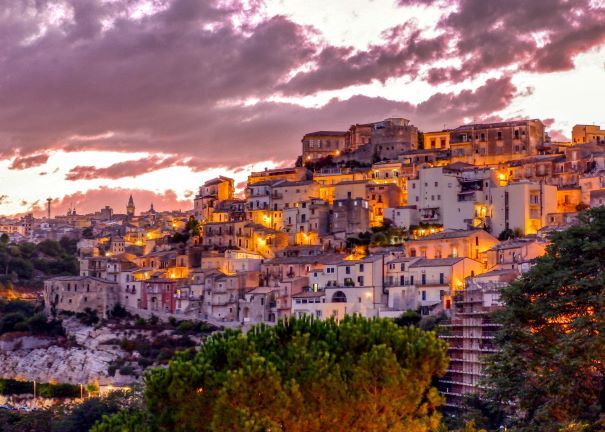 And there are also researchers who are looking at how fire can be dealt with in a different way:

How does il circolo arm itself against wildfires?

Wildfires are not uncommon in the area where the olive trees of il circolo grow. It is a nightmare for every farmer.  Good maintenance is not a luxury but a necessity. The blackened pieces of land or sometimes even whole hills remind us of this. And also that you need each other for this. It makes little sense to take fire prevention measures on your own land if your neighbours do not. This interdependence is a vulnerable point. Especially in an area where many people move away. How does il circolo deal with this? 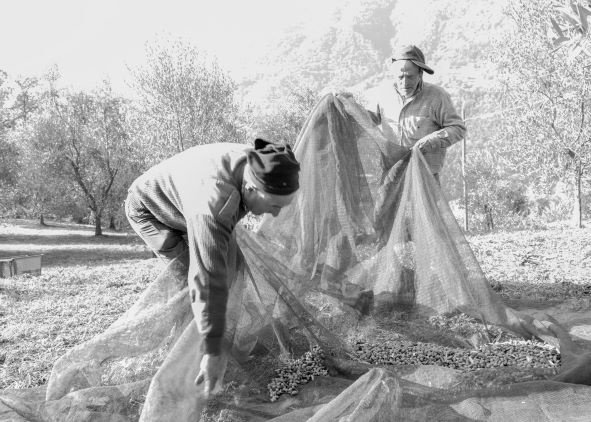 As of the end of 2020 il circolo is allowed to use the D.O.P. label for its extra virgin olive 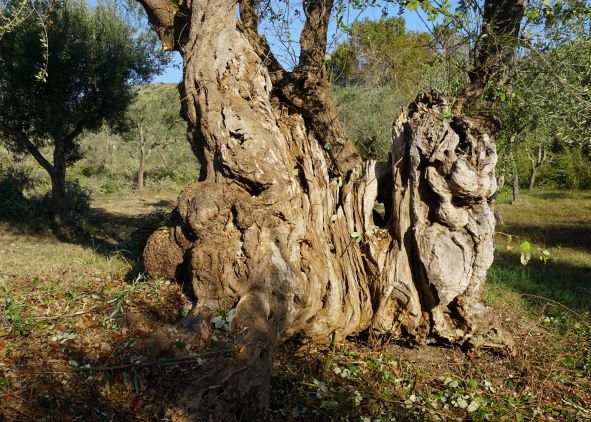 Every day, but especially on 26 November we honour the olive trees in our olive grove – from young to 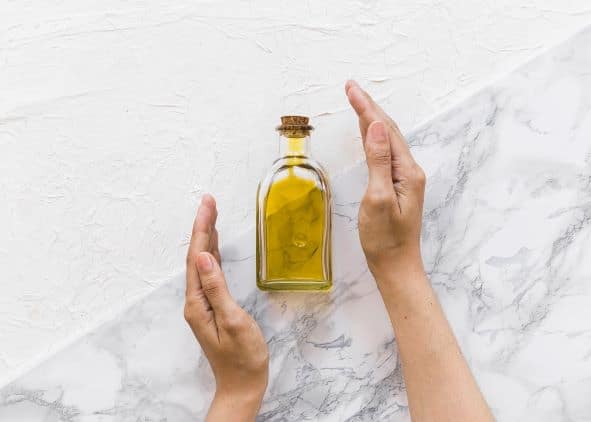 Olive oil and shelf life: how long can you keep olive oil?

Since I have been using il circolo extra virgin olive oil, I have really come to appreciate how fresh olive