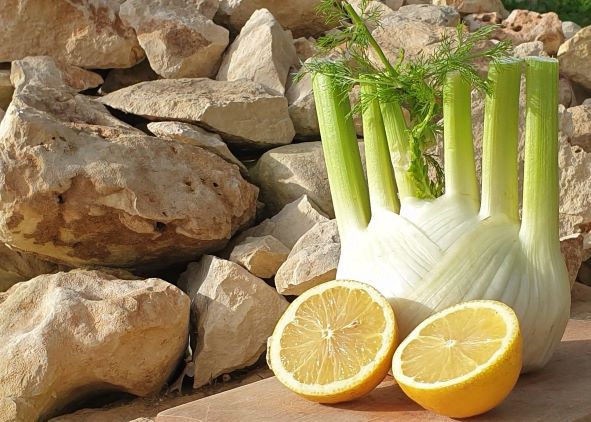 Risotto with lemon and fennel

Risotto is one of the best-known and most popular traditional Italian dishes. Every season has its own risotto. In autumn, mushrooms or pumpkin are perfect for risotto, in winter, cheeses, in spring, new, young vegetables and in summer, fish and shellfish. This recipe is a variation with fennel and lemon. Not such a crazy combination if you consider that fennel and lemon are in season at the same time in Sicily. This risotto has a deliciously light and fresh taste.

Which type of rice?

Not all types of rice are suitable for risotto. Choose rice with a large round grain such as Arborio, Vialone Nano, Baldo or Carnaroli rice.

Does the rice need to be washed?

In order to remove the thin layer of starch which covers the rice grains, the rice should be washed before use. After draining in a colander you can dry it with kitchen paper.

When cooking risotto, you follow more or less the same steps:

The last step is to make the risotto creamy. Let the risotto rest for a minute and then add butter and/or cheese. Take the pan off the heat and add the butter (in pieces) and cheese. Stir with a wooden spoon until the cheese and butter have completely melted. You can also omit this and drizzle the risotto with good olive oil before serving.

When is fennel in season?

Fennel is mainly grown in the countries around the Mediterranean Sea. In Italy, fennel is available from autumn until late spring. In summer, however, the temperatures in Southern Europe are too high for fennel. This is when the fennel season starts in the cooler Netherlands. So fennel is available all year round. The Dutch fennel season runs from the beginning of June through October.

What is fennel and how does it taste?

Fennel is also known as Florence fennel, finocchio, or sweet fennel. It is a hardy biennial or perennial plant which can grow up to 2 metres high. The plant has an average size of 45 cm. It is bulbous in shape and looks a bit like celery with a thick tuber. Raw fennel has a crispy texture and a distinct, fresh, aniseed-like flavour. When heated, fennel becomes less pronounced and has a softer flavour.

How can you recognise fresh fennel?

Fennel tubers look fresh and green and feel firm and heavy for their size. The skins are white without blemishes and the foliage also looks fresh green. Buy fennel as fresh as possible. Go for the small, younger tubers – if they are available – as they are more tender. If fennel is left to rest for too long, it will develop brown spots and the foliage will turn yellow. The taste also decreases.

Which parts of fennel are edible?

How to clean fennel?

How to store fennel?

Where is fennel from originally?

Fennel is originally from Asia and arrived in Italy and the Mediterranean via medieval trade routes. In the early 18th century, it was further introduced to our regions. It is popular in Italian – and certainly in Sicilian – cuisine.
Want to know more about fennel? Click here.